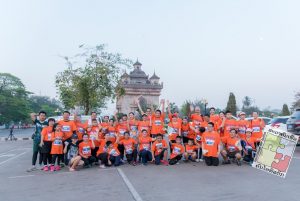 For some of the Association for Autism members, it was a short night. After an amazing concert by Pouna at O’Grady’s Irish Pub on Saturday night March 3, they were up early. Very early to be honest. But it was worth the effort. Almost a hundred people from AfA, children with autism, their parents, grand-parents, siblings and teachers from VAC joined a crowd of 1.500 runners in the 5 kilometre fun run as part of the Vientiane International Half Marathon. The runners were released from That Luang square at 6 am. As they made their way down to Patou Say, the Vientiane Arc de Triomphe, they met the front runners from the half marathon who had started their race 45 minutes earlier. Obtaining a record-breaking speed was not the focus of AfA’s participation in the run. Community inclusion was. Children with autism joining community activities is the focus for AfA throughout 2018.
This special event was the result of many supporting hands. Just a couple of months earlier AfA Director Viengsam Indavong discussed participating in the run with guests from Rainbow Centre and St. Andrew’s Autism Centre in Singapore. As a result they started the ”My shoes run for Autism in Laos” collecting almost 200 pairs of running shoes, some backpacks and other items for the children in Laos. But the shoes would not have reached their destination without the immediate support from staff of two airlines: Mr. Caleb Sim from Silk Air and Mr. Saleum Tayarath from Lao Airlines. We would also like to extend our sincere thanks to Lao Customs office at the airport for assisting the smooth transition of the shoes.

Not to forget the support by Events for Good (EFG), the event organiser, waiving the registration fee for the autistic kids and generous donors from Singapore and Laos paying the fees for some of the parents as well.
Finally, everything went well and the kids and their families enjoyed an early Sunday morning in the streets of the Lao capital. Some mingled into the crowd, others stayed together in a joyful group. Some ran, others walked, some had to be pulled forward and others ended in the arms of their strong fathers. One of the boys, getting tired, even got a ride on the ambulance car back to the finish line.
There as the sun rose everybody enjoyed some refreshments and snacks for breakfast. Tiring exercise? No, a great experience and chance to meet others from the ever growing AfA family.