On the occasion of the World Autism Awareness Day AfA Board member Ms Viengsam Indavong was very very active in Australia. She wrote from Adelaide:
The main focus of the Autism in Laos Awareness and fund raising event is to sell the t-shirt to people mainly people in Adelaide through friends and friends of friends. The only event that I and Lao student association here will do together is to have our sale boot at Lao Temple on the 15th April 2017 during the celebration of Lao New Year.
Other than that it is a social media based for example, promotion of t-shirt on my facebook page, Autism SA page, internal email to all students of Department of Disability and Social Inclusion.
So far I received some order from Sydney and few students at Flinders Uni. Some of my friends who send their child to the same school order some. Therapists order some. Some of the students will buy some too. Hopefully we will sell a lot more at the temple.
People will wear t-shirt and post on their facebook walls.

The linkage between Australia Awards and Autism in Laos:

In 2015, Ms. Viengsam Indavong who is a mother of a boy with autism, the board committee member, the co-founder and former president of AfA received Australia Awards to study Master of Disability Policy and Practice at Flinders University, South Australia. This awards have given the education and networking opportunity not only for Viengsam but also for her son (Ton) to access to quality education and professional support services in Australia.
Viengsam and Ton have been receiving both formal and informal support from Flinders University, Disability and Community Inclusion Unit, Department of Education and Child Development, Errington Special Education Centre, Lao student association in Adelaide, Autism SA, Lolly Jar Circus, Aberfoyle Park OSHC, Hugo Barber Shop, MyTime group, Lao community in Adelaide, friends and relative in Canberra, Sydney and Queensland.
It has been a remarkable journey both of them settling in the new country, learning new skills, making new friends and have access to professional services such as counselling, speech and occupational therapies.
In her final semester until July 2017, Viengsam wants to acknowledge the great opportunity and support that she and her son received and proof its impact in her life and other people lives by organising an event under the project theme of ‘Developmental impact starts now’ in collaboration with Lao student association and local friends and supporter in Adelaide. Through a connection of Hugo Barber Shop, Viengsam received AUD $300 from Mr. Gino Ienco to print Autism Awareness T-Shirt. Hugo Maiolo, the owner of Hugo Barber Shop donated $130 to share some of the transportation cost of T-Shirt from Laos to Adelaide. 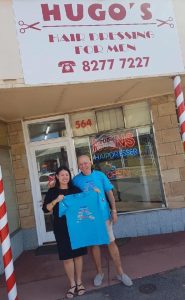 Viengsam’s original aim was to give some of the T-Shirts to Ton’s friends at Aberfoyle Park OSHC School that he attends in each school vacation as a souvenir before Ton leaves Australia. Viengsam is very impressed with the way children reach out for Ton to give him a sense of friendship despite the difficulty in verbal communication.
Since she received a donation to print more T-Shirt, Viengsam decided to sell some of them in order to raise funds to support other children with Autism in Laos. The income earned from this event will be given to the scholarship fund of AfA as a contribution of the celebration of the World Autism Awareness Day. This contribution will help people with autism in Laos to continue receiving education and support services they need. It will also help ease some of the stress and burden of those families with low income in raising a child with Autism.