Every year on April 2nd activists all over the world celebrate the World Autism Awareness Day (WAAD). In Laos we do so since 2011. In many countries marking just one day for autism awareness is not enough as many different activities to disseminate information about the Autism Spectrum Disorder are organised. Association for Autism, the parents association of persons with autism in Lao PDR, started on April 2nd with the paintings sales exhibition. Held for the third year in a row and again greatly supported by Mercure Hotel Vientiane the event offered something very new. For the first time pictures painted by children and teenagers with autism were part of the exhibition. 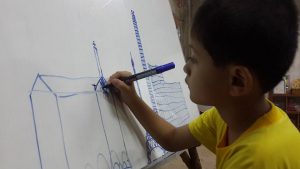 One of our talented young artists

One objective of WAAD celebration is also to raise money enabling AfA to further support children with autism in their education efforts by providing scholarships. This year many companies in Laos reacted to our call and donated in cash or kind. Other activities like TV programs and provision of information about autism through different media were spread throughout the month of April.
This year’s campaign concluded on April 30 with the Glow Run For Autism. The event, organised with support of EFG company, saw almost 2.000 people gathering on the Mekong river bank for a fun run of 5 km along the river. This event alone added 46,5 million Kip to the AfA account. 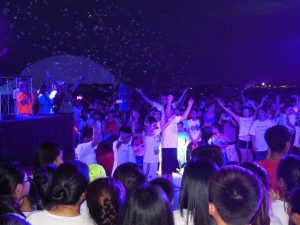 Warming up the crowd – dance performance of children with autism

A very big thank you to all our helpers and supporters contributing to the big success of the 2016 Autism Awareness Campaign in Laos.