In the early morning of Friday, 07.10.2017, a group of 7 children from the Vientiane Autism Center aged from 10 to 17 years started to a long journey. Two young people with ASD began their journey with a flight to Bangkok, boarding the plane was very exciting; while the other 5 athletes travelled by van from Nongkhai to Bangkok. Their destination was the Bangkok Youth Centre where they met with their friends from other ASEAN countries to compete in the Disability-Inclusive Sports for Tomorrow (DIS). Supported and cheered by their parents and teachers from Vientiane Autism Center, they participated in running, pétanque, futsal, flying disk and traditional sports. 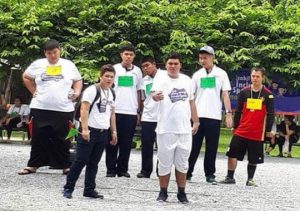 Weeks of training and preparation with the teachers at Vientiane Autism Center supported by Coach Thevarith Thanthavone, better known as T.C., at Tiao Anou Stadium finally paid off with 2 gold and 3 bronze medals. Anonh came in first in the 50 meter race for boys under 16 years. Marcel with his teachers Khu Laa, Khu Joy and Khu Wan teamed up to win the tug of war competition above 16 years. Nadia won a bronze medal with a third place in the 50 meter race for girls under 16. Weston deserves a special mention as from the time he arrived in Bangkok he suffered from fever. However, together with Te Te, they won the bronze medals in the pétanque team competition (under 16).

The DIS was organised by the ASEAN Autism Network (AAN) which unites associations of parents of children with autism from all ASEAN countries with support of the Foundation of the Asia-Pacific Development Center on Disability (APCD), the Thai Government and the Japan Foundation Asia Center. On this occasion the Executive Committee of AAN met and decided to organise the next disability-inclusive sports event in conjunction with the 4th AAN Congress 2018 in Indonesia. 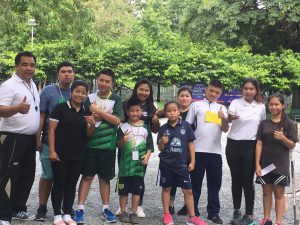 The Association for Autism would like to express our special thanks to Mr. Thevarith Thanthavone (Coach T.C.) for his dedication in helping people with ASD achieving their highest potential through participation in sport and physical activities. His time and effort volunteering with us are priceless.

The Association for Autism would like to express our gratitude to Ms. Lina Phonethip for connecting us to the local businesses and supporters.